In this article, we are going to see what is OSI model and the 7 layers of OSI Model, in computer science and engineering OSI model is the basic model to understand that how the data transfer happens in computer to computer.

The OSI Model, also known as Open System Interconnection Model, describes and helps to understand how data is transferred between computers in a computer network. The simplest form of the OSI Model is two computers connected together with LAN Cable (Network Media), connectors (RJ45), and sharing data with the help NICs.

Why Do We Need OSI Model

How will two computers communicate with each other if one is running Microsoft Windows and one has macOS? International Organization for Standardization introduced the 7-layered OSI Model, or Open System Interconnection Model, in 1984 to enable successful communication between computers and networks of different architectures:

Note that each layer is a package of protocols (set of rules and conventions).

These protocols together form the Application layer. These protocols are the foundation for many network services such as file transfer, email, web surfing, virtual terminals and so on. FTP protocol is used to transfer files. You can surf the web using HTTPS or HTTPS. For email, SMTP protocol and TELNET are used. Application Layer is a layer that provides network services with the aid of protocols to carry out users activities.

The Presentation Layer reduces bits used to represent original data before data is transmitted. Data compression is a bit reduction process. It can be lossy or lossless. Data compression reduces the space required to store the original file.

The file’s size is smaller, so it takes less time to get to destination. Data transmission can be accomplished faster. Data compression is extremely useful in streaming audio or video real-time. Data encryption is used to protect data integrity before it is transmitted.

As you would hire helpers to help you at your party, the Session Layer also has its own helpers known as APIs (application programming interfaces). NetBIOS, or Network Basic Input/output System, is one example of an API that allows different applications to communicate with each others.

The server performs an authentication function just before a session is established or a connection is made with a server. Authentication is the process by which you verify who you are. The server uses a username or password to do this.

Once your username and password match, you can establish a session (or connection) between your computer’s computer and the server. You can now upload or download the files you need. After authentication, authorization is performed.

The server uses authorization to verify that you have the permission to view a file. If you don’t have permission to access a file, the server will display a message saying “You are not authorized” These functions, Authorization and Authentication, are performed by the session layer.

The session layer keeps track of files downloaded. For example, a web page contains text, images etc. These images and text are saved on the web server as separate files. Your web browser opens a separate session with the web server when you request a website.

This allows you to download all of these images and text files. These files are sent as data packets. Session layer tracks which data packet is associated with which file. This can be either text or image files. It also tracks where the data packets go.

Through flow control, segmentation and error control, the transport layer ensures reliability in communications. Segmentation is a process where data from the session layer are divided into smaller data units called segments. Each segment includes a source number, Destination number, and sequence number.

Mobile can only process data at 10 Mbps while Server can transmit data at maximum 100 Mbps. We are downloading a file from the server. However, the server begins sending data at 50 Mbps. This is more than the speed that a mobile phone can handle.

Error control is also possible with the help of transport layer. Transport layer can use Automatic repeat request (ARQ), schemes to retransmit corrupted or lost data if some units fail to arrive at the destination. To determine if a data unit has been received incorrectly, checksum is a collection of bits 1s & 0s that are added to each data segment by transport layers.

The session ends when the conversation is over. UDP, on the other hand, delivers data packets to users without requiring them to set a path. No session is established. Traffic on available routes will determine the data delivery path.

UDP is quicker than TCP, as it uses a lower traffic route for data delivery. UDP does not provide feedback on whether the data was delivered, while TCP does. TCP can retransmit lost packets. UDP can be used wherever, it doesn’t matter if we have all the data. E.g. You can stream movies, songs, online videos, Voice over IP and TFTP, as well as voice over IP and DNS.

TCP can be used when full data delivery is required. E.g. E.g., World Wide Web, Email and FTP Transport layer is responsible for segmentation, flow control and error control as well as connection and connectionless transmission.

The Network layer performs the following functions: Logical Addressing, 2. Routing, 3. Path determination Logical address: This is IP addressing (IPv4 and IPv6) that is done at the network layer. Each computer within a network has a unique IP address. This layer is responsible for data delivery and assigns the sender’s and receiver’s IP addresses to each packet to ensure that it reaches its destination.

Now, we receive a packet reply from Facebook server. This packet must be sent to Computer B only. Each device in a network has a unique IP address. This means that both computers will have a unique address. The packet has already been added to the network layer by Facebook server.

The mask indicates that the first three combinations represent network and the last represents host or Computer A. Based on the IP address format, the received data packet will be moved to network B1 then to computer B. Route decisions in a computer network are made based on IP address, mask and other information.

Path determination A computer can connect to any computer or internet server in many ways. Path Determination is the process of determining the best path to data delivery from source and destination. Layer 3 devices use protocols like OSPF (Open Shortest Path First), BGP (Border Gateway Protocol), IS–IS (Intermediate System To Intermediate System) and BGP (Border Gateway Protocol) to determine the best path to data delivery.

The manufacturer embeds MAC addresses in the NIC of your computer. Frame is the Data link layer’s data unit. Data Link Layer is embedded in the NIC of a computer. It allows data to be transferred from one computer to another using local media.

Local media include copper wire, optical fiber and Air for radio signals. Media does not include audio, video, animation, etc. It is the physical link between two or more computers, networks. Two basic functions of the Data Link layer are: – It allows upper layers to access media using techniques like framing. – Manages the data received and placed from the media using techniques like media access control and error detection.

Router R1 is connected to R2 via a satellite link, and router R2 is connected to the laptop via a wireless link. Now, the desktop needs to send data to the Laptop. Based on the medium that was used to connect desktop to Router R1, Data Link Layer – embedded in NIC of a laptop adds data to head and tail of IP packets and converts them to frames, which is an Ethernet frame.

Two or more devices may send data simultaneously, which could lead to collisions that result in messages that are not understood by the recipients. Data link layer monitors when shared media is available so that the receiver can receive data.

This is Carrier Sense Multiple Access CSMA. Data Link Layer with its Media Access Control methods controls when data is received and placed from the media. Each frame’s tail contains bits that are used to detect errors in the receiving frame. These errors are caused by limitations in media that can be used to transfer data.

Data from the application layer was segmented by Transport Layer, put into packets by Network Layer, and then framed by Data Link Layer. This is a sequence of binary 0s or 1s. This binary sequence is converted into signals by the Physical Layer and transmitted over local media. It could be an electrical signal for Copper Cable, LAN cable or Optical Fiber, or a light signal for Optical Fiber. Radio signals are used in local media such as Air.

The type of Media used for connecting two devices will determine the signal that the Physical Layer generates. The physical layer at the receiver receives signals and converts them into bits. The frame is then passed to the Data Link Layer, which in turn passes it on to higher layers and finally to the application layer. The application layer protocols make the sender’s message available in the application on the receiver’s computer screen. These are the 7 OSI Model layers that are responsible for Internet’s smooth operation.

Posted by Rocoderes
Rocoderes is a blog you can learn HTML, CSS, JavaScript, React Js and Python along with creative coding stuff and free source code files.
Previous Article How to Make JavaScript Form Validation
Next Article 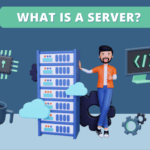 Server Explained: What is a Server? It’s Working

How To Become a Javascript Developer